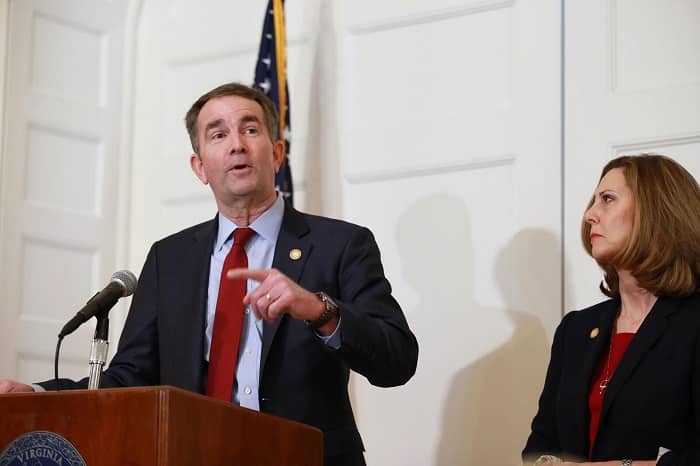 The Congressional Black Caucus (CBC) leaders call on Virginia Democratic Gov. Ralph Northam to resign after a racist photo surfaced from his medical school yearbook page. But even after hearing Northam tell his side of the story — that it wasn’t him in the picture, but still, there are dozens of prominent Democrats calling on him to step down.

Appearing on Sunday’s “Meet the Press,” Rep. Karen Ruth Bass, D-Calif., the chairwoman of the CBC and Virginia Democratic Rep. Donald McEachin said Northam’s answers have only made the situation more untenable since the photo, which shows one man in blackface and another in a Ku Klux Klan robe, became public on Friday.

Karen Bass criticized Northam as “completely dishonest and disingenuous,” and it is unworthy for Northam to stay in office and he is forcing a conversation on race.

“He’s forcing the wrong conversation. What he should do is resign, and if he has any integrity at all, he should participate in that conversation,” she said.

Their calls reached many high Democratic figures across the country who has called for the governor to resign since the photo surfaced.

Northam apologized profusely for the image, which showed a man in blackface and another wearing a Ku Klux Klan costume and for any pain that it might have caused. “It is disgusting; it is offensive, it is racist,” he said.

But during a Saturday press conference in denying that he posed for that racist photo from 1984, Northam admitted to dressing up in blackface that same year portraying Michael Jackson in a dance contest. He described in detail how to apply blackface with shoe polish, and the difficulty of washing it off.

“He even acted at the press conference like he was willing to moonwalk until his wife stopped him, which shows he still does not understand the seriousness of his actions,” Rep. Karen Bass said.

Those who were waiting on the sidelines before offering their opinions emerged Saturday afternoon unconvinced that Northam should remain in office.

Former Gov. Lawrence Douglas Wilder said “I stated, earlier, that Gov. Northam’s continuing in office was his choice to make. It is difficult for anyone who watched the press conference today to conclude that he has any other choice … but to resign.”

Republicans quickly seized on the image as it was being circulated to try and further harm the good reputation of Northam But it’s not just Northam’s opponents who are saying he should resign. Members of his own party have added their voices to the chorus. Some — like Democratic National Committee chair Tom Perez — even released their statements calling for Northam to step down as he continued to take questions from reporters.

DNC Chair Tom Perez on Ralph Northam stated, “Virginians and people across the country deserve better from their leaders, and it is clear that Ralph Northam has lost their trust and his ability to govern.”

There is a growing list of politicians, high government officials, and organizations calling on Northam to resign, both before and after his press conference. If Northam ultimately resigns, Lt. Gov. Justin Fairfax, who is black, will take over as governor.