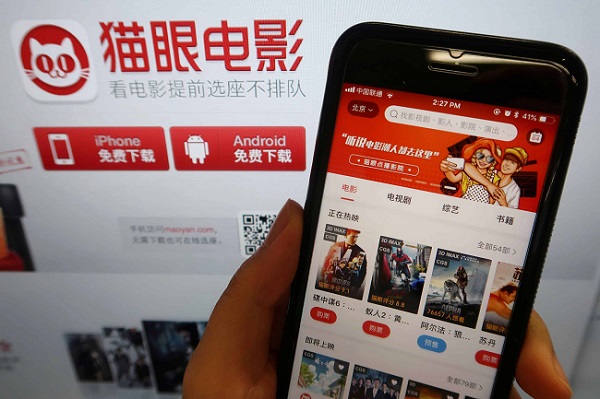 The biggest ticketing app in China Maoyan which is backed by Tencent made its IPO debut, but the shares fell by 1.1 % in the Hong Kong stock market on Monday. Maoyan Entertainment is among the Chinese tech firms which have made a weak start after being listed. The trend of underperformance of new stock listings is growing due to the trade tensions between China and the US.

Maoyan entertainment which offers online ticketing services through its apps also distributes local movies also the distributor of the Oscar-winning movie ‘The shape of water’ in 2017. The company’s revenue doubled to 3.1 billion Yuan in 2018 but is yet to show a net profit. It reduced the losses to 144 million Yuan from 152.1 million yuan. With an over-subscription of 1,32 times and after raising $250 million funding for the IPO the Maoyan float got a tepid reception. The app had initially wanted to raise $500 million to a billion in the first-month transactions.

Tencent is the second biggest shareholder, and for the IPO listing, Maoyan had enlisted China IMax, Xiaomi and WeLight capital as it’s investors. The biggest shareholder of the app is Beijing Enlight media with stakes of 48.8%. The sponsors for this listing is Bank Of America and Morgan Stanley. Despite being associated with such big names, the Maoyan Entertainment opening was very weak at $1.89 or HK $14.82 which is only a little higher than its IPO price of HK $14.8.  It comes as a great warning sign to other tech firms in China which is considering IPO’s even after getting good valuations in funding rounds. Ke Yan who is the head of Aequitas Research said that the trading could also be low due to the trading session closing early due to the upcoming Lunar New Year and may have been the reason for the Maoyan shares performing so badly.

Market experts and analysts are watching the development closely as they believe this to be testing the investor sentiment for deals in Hong Kong. Most of the newly listed IPO’s of the tech firm has not done well due to the US-China trade war. Meituan Dianping which is an online food delivery to ticketing services and smartphone manufacturer Xiaomi who raised billions of dollars are also trading below their IPO. Investors are now getting ready to face a downturn in the tech sector due to globally weak stock markets and a slowdown in the Chinese economy.